Like many others, I have been taking in the last few weeks with so many things I wanted to say but lacking the words. Though I still don’t have the words and probably never will, I know that staying silent about issues that matter is the fuel that allows injustice to perpetuate unchallenged. So, though these thoughts are still being worked through, I know it is important for all of us to be dialoguing, voicing our outrage with those who are most immediately affected, and questioning what on earth can be done so systemic issues don’t continue with our silent consent. 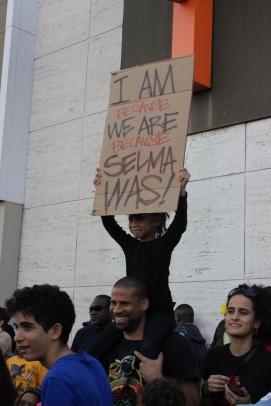 We were driving from Oklahoma to California. By day 1, 2, 3, 4 we were tired of sitting in the well-loved, battered 4Runner for endless miles, antsy to be out and loopy from watching the heat visibly cross the road in wobbly patterns. To wake us up, Jake started blasting cheesy music and clicked on the GoPro. In response the two of us danced like baboons that had their behinds Velcroed to the seats, and as our dance moves got wilder so did the car’s trajectory on the road. From behind, I am sure it looked like two demon-possessed creatures trying to mimic the motion of a snake with their vehicle.

Whatever it looked like, the police did not seem to appreciate it. They signaled us to pull over with their spinning lollipop lights. We turned off the GoPro as the cop made his way to our window, then tried to contain our giggles as he asked how many drinks we’d had that day. When we responded zero, he gave us a warning to drive more carefully and sent us on our way.

As I watched the video Diamond Reynolds took of her boyfriend Philando Castile’s shooting, the tears immediately spilled over. Why on earth is my boyfriend still alive and this woman’s now dead? Why is a little girl fatherless because of a busted taillight? Why is our police force’s reaction to kill rather than protect?

Question after question after unanswerable question flowed with the tears. And as so many of us are asking similar questions, we are attributing race and its constructs to be the root cause of the injustices we are witnessing. While I do not discount this, I will venture to say that the root may run even deeper. Maybe, just maybe, the root of so many of these systemic issues is our fear of that which is different from us.

We see video after video of cops shooting citizens who look different from them. When I see a man with a badge using a gun to end the life of the innocent, I do not see the strength of our police force. I see fear. And as I watch the news relay story after story of humans ending lives of fellow humans, I see a bigger story of humanity’s fear of differences. I see fear everywhere, and as I take in fear after fear killing the innocent, I have to ask another question: What is my role in this? Which of my fears contributed to the deaths of Philando Castile, Alton Sterling, Michael Brown, Eric Garner? My friends, the roots of these issues start in you and me, not the police.

So here is my open apology for picking up my pace when I see a black man walking behind me but not thinking twice when he is white. I apologize for the times I tried to gain more perspective on racial issues and asked a black friend to be the voice for their entire race. I apologize for watching police brutality against black lives, cringing and mourning for a few days, and then moving on because I didn’t know what to do. I apologize for blaming the police for too long instead of looking inside myself for my own role in these systemic issues.

I apologize for fearing those of you who think differently from me, for not taking the time to hear you out before separating you and I into the categories of “us” and “them.” I apologize for not bringing up certain issues because you are a Republican, already assuming our different political views determine how much we care about people. I apologize for not starting the dialogue about race with my white friends, for fear they will have a different opinion and I will lack adequate words, further betraying those I want to stand alongside. I apologize for all the moments I chose silence and complacency because it was easier than showing up with those who are lamenting and speaking up for equality and justice.

As my apologies are only good if a change in action follows, I have hesitated to post this until I have wrestled with what it means to choose change. Looking back on my contemplations of race and inequality, the first dialogues I had took place in South Africa, where Desmond Tutu led movements to bring about reconciliation in his country. His philosophy for doing this was “Ubuntu,” which can be summarized as “I am because you are.”

The journey ahead will be long, dear friends, but it starts with us. John 11:35 says, “Jesus wept.” Jesus cried because he lost a beloved friend. But he didn’t stop with His weeping. He went on to raise His friend from the dead. So, let’s cry together, mourn together, lament that our country is filled with injustice because we fear our differences. But let’s not stop with our weeping. Let’s talk about it. Let’s dialogue. Let’s show up for each other. Let’s move when we need to move. Let’s pray when we need to pray. Let’s embrace the differences and take time to discover our similarities. “I am because you are.”

View all posts by Rylie Shore

2 thoughts on “I Am Because You Are”